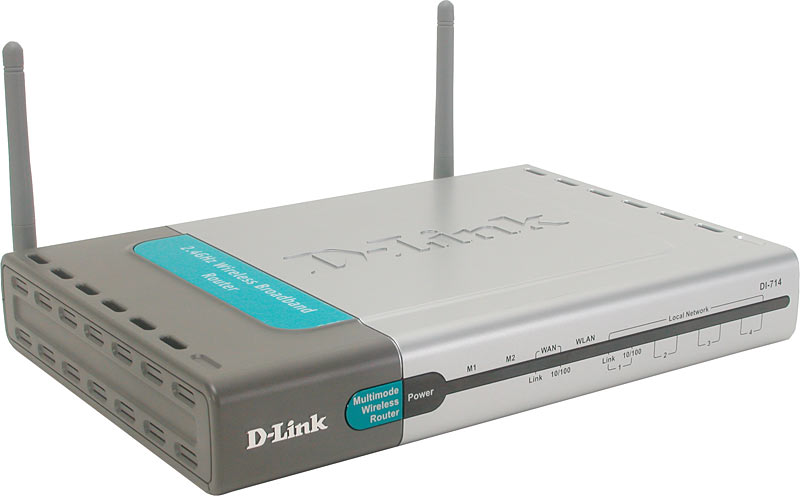 Wireless Broadband Router
Where to buy

The D-Link DI-714 is a broadband IEEE 802.11b compliant wireless gateway with a built in four-port switch. The DI-714 provides the ability to share a DSL or Cable Modem through either its four Ethernet ports or via its integrated Wireless IEEE 802.11b component. Also, the DI-714 is equipped with a serial port to connect an external analog modem for a backup dial-up connection. The DI-714's integrated Router and Firewall provide NAT, DHCP, and packet filtering services between the local network and the Internet.

D-Link's DI-714 allows wireless LAN users to share a single Internet connection while providing the safety and security of port blocking, packet filtering, and a natural firewall. Static address support, integrated DHCP, PPPoE, and device name support will allow it to connect to nearly any broadband provider whether Cable or DSL based, and at the same time simplify local area network settings. The DI-714 provides two levels of security support. First, it masks local users' IP addresses from others on the Internet making it much more difficult for a hacker to target a machine on the network. Secondly, the DI-714 blocks outgoing ports unless required by applications specified in Virtual Server settings. The DI-714 provides special pass through support for common  VPN implementations including PPTP (Point to Point Tunnelling Protocol), L2TP (Layer 2 Tunnelling Protocol)  and IPSec*. The Virtual Server feature allows the user to expose HTTP, FTP, Game Servers and other local services to be accessible to Internet users located outside of the LAN.  A DMZ setting can be applied to a single client behind the DI-714 to expose it to the Internet and ensure complete Internet application compatibility even if specific ports are not known.Unlike proxy server or NAT software that requires the software server to remain visible on the Internet, no local computers are directly externally visible when using the DI-714. Also the DI-714, like broadband, is always on, eliminating the need to constantly boot a software server when access is desired from a client. Integrated DHCP services allow up to 252 users to get their IP Address automatically on boot up from the DI-714. Client machines require no software, simply set them to accept a dynamically assigned IP address and reboot. Each time they are powered up the DI-714 will recognize them and set their IP address to instantly connect them to the LAN.* The router passes PPTP, L2TP and IPSec packets. VPN compatibility is dependent on the platform used.