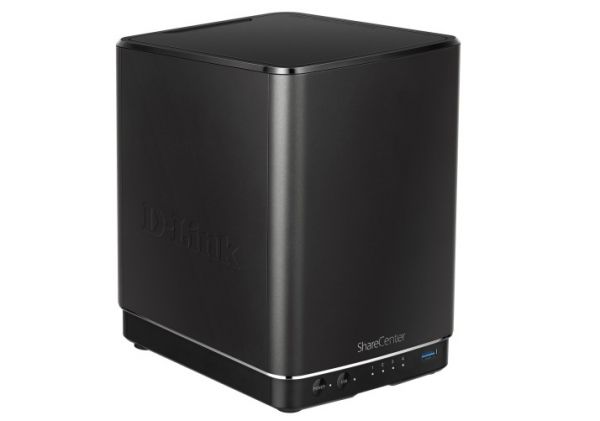 Network drive DNS-340L 4-bay hard disk drive is a convenient solution for sharing and backup of the important data, including through the creation of a personal 'cloud'. Thanks to the high-performance disk drive DNS-340L All your data will be stored and protected.

High performance and versatility
Disk drive DNS-340L supports hard drives in various configurations (Standard, JBOD, RAID 0, RAID 1, 5, 10), you can choose the most appropriate one depending on the user's requirements. Standard mode creates up to two separate sections. JBOD combines the drives into one volume. RAID 0 combines the disks in the array data striping to provide maximum performance. In RAID 1, the contents of one hard disk is duplicated on the other, to ensure maximum reliability. RAID 5 uses the space of three discs set, and the fourth disk is used as a backup. RAID 10 - RAID 0 is made ​​up of several RAID1 arrays. RAID 10 is a mirrored array, wherein the data is written sequentially on multiple disks, which provides protection and high data transfer rate. DNS-340L supports "hot" replacement, thus allowing the replaced hard drive without powering down or rebooting the device.

Remote sharing
Network drive DNS-340L is equipped with a Web-server file that lets you download documents, photos and other media files, regardless of your location. After setting up access to the drive, use the user-friendly Web-based to view a list of available files.

After registration, DNS-340L mydlink when you can use the app mydlink Access - NAS to connect to the device and play music, video and photos directly on your mobile device. With mydlink service can easily gain remote access to media content, without complicated network configuration.

Easy Installation and Setup
In the NAS DNS-340L can be set for 3.5-inch SATA hard drives up to 4 TB1. Installing drives is straightforward - simply remove the top cover, and insert the hard drive into the bay. USB-ports are conveniently located on the front and back of the drive, you can use either for sharing USB-printer, or to connect an external USB-drive with the purpose of the backup at the touch of a button. You can also connect an uninterruptible power supply (UPS) to ensure data integrity in case of power failure.

When sharing the DNS-340L and router D-Link Cloud technology can be applied Zero Configuration, which greatly simplifies the setup DNS-340L. Simply select the type of RAID, as Zero Configuration mechanism performs the rest.