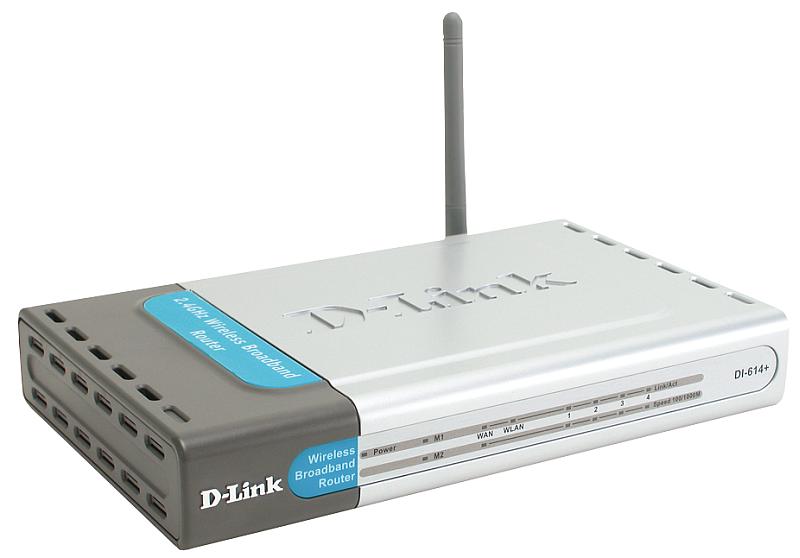 802.11b Wireless Cable/DSL Router With 4-Port Switch
Where to buy

Simplified, Cost-saving Broadband Internet
With the DI-614+, you can share your broadband line and cable/DSL modem anywhere in your office or home. T o let everybody logon, this device automatically creates and assigns an IP number for each user, simplifying every one's logon operation.

Ready Connection
With built-in wireless LAN and 10/100Mbps switch, the DI-614+ provides ready connection for workstations and servers, with or without the network wires. The built-in functions also save you the cost and trouble of installing a separate Access Point and Ethernet switch.

Enhanced Wireless Speeds
The built-in Access Point enables the DI-614+ to be used in larger wireless networks in conjunction with other standards-based wireless LAN Access Points. At 22Mbps, the DI-614+ provides 802.11b wireless LAN users a high data transfer rate within the industry standard. This speed is double the 11Mbps normally found in other 802.11b 2.4GHz wireless devices.

Network Security
The DI-614+ provides NAT protection for your office and home users from Internet intruders and hacker attacks, plus VPN pass-through for extra security. It blocks and re-directs certain ports to limit the services that outside users can access your network. Virtual Server Mapping is used to re-task services to multiple servers. The DI-614+ can be set to allow separate FTP , Web, and Multiplayer game servers to share the same Internet-visible IP address while still protecting your servers and workstations from hackers. Protection for wireless users is provided through a 256-bit strong WEP data encryption scheme.

DMZ Host to Open Public Domain
You can configure any of the built-in LAN ports to function as a DMZ port. A DMZ setting can be applied to a single client (such as a Web server) behind the router to fully expose it to the Internet and ensure complete Internet application compatibility even if the specific port is not known. This allows you to set up web sites and e-commerce business from your office while maintaining protection for the rest of your office LAN.

UPnP Enabled for Compatibility
The DI-614+ is designed for easy and robust connectivity among heterogeneous standards-based network devices. Computers can communicate directly with the DI-614+ for automatic opening and closing of UDP/TCP ports to take full advantage of security provided without sacrificing  functionality of on-line applications.

Network Timing Protocol (NTP) Support
The DI-614+ supports the Network Timing Protocol (NTP), allowing you to install a time server behind the router to symchronize time for your network environment. This protects you from the risks inherent in obtaining Internet, minimizes security risks from the outside, and maximizes timing accuracy on your network.