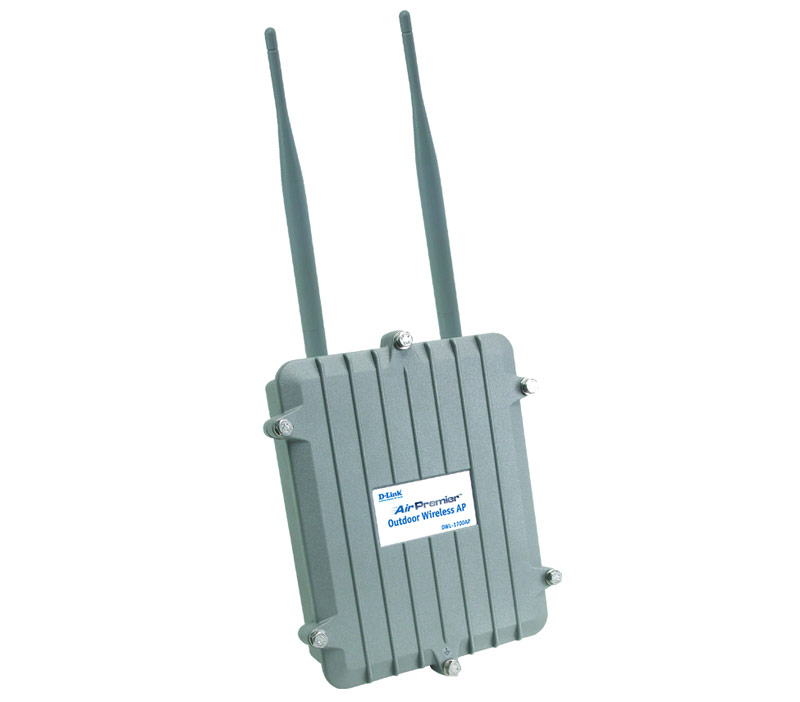 Ideal for Creating Internet Hotspots
The DWL-1700AP is ideal for Internet Service Providers, store merchants and other small business owners to create networks and provide outdoor users with wireless Internet access. It can also be used in many other outdoor networks such as manufacturing plants, industrial locations, military bases, universities, college and high school campuses, hotels, airports, golf courses and marinas.

Built-in Power Over Ethernet
The DWL-1700AP includes cost-effective Power-over-Ethernet (PoE) for supplying power to the AP when a power outlet is not easily available and it includes the necessary hardware for mounting on a roof top or other exterior locations.

Data Encryption and User Access Security
The DWL-1700AP has a built-in DHCP server . The DHCP Server will automatically assign an IP address to the computers on the LAN/private network. When you turn your computers on, they will automatically load the proper TCP/IP settings The device provides up to 128-bit WEP data encryption. IEEE 802.1x user authentication support working in conjunction with RADIUS servers and MAC address control are provided for user access security.

Built-in DHCP Server
provided by the DWL-1700AP. The DHCP server will automatically allocate an unused IP Address from the IP address pool to the requesting computer.

Built-in Router and Firewall
The DWL-1700AP can operate as a NAT inbound virtual server and provides IP based access control. The DWL-1700AP firewall feature filters out unrecognized packets to protect your LAN network so all computers networked with the DWL-1700AP are invisible to the outside world. Denial of Service (DoS) protection is also included with the DWL-1700AP to prevent the wireless network from being hacked.

Virtual Server Support
You can make some of the LAN computers accessible from the Internet by enabling Virtual Server . Remote users accessing Web and FTP services via the public IP address can be automatically redirected to local servers in the LAN (Local Area Network.)