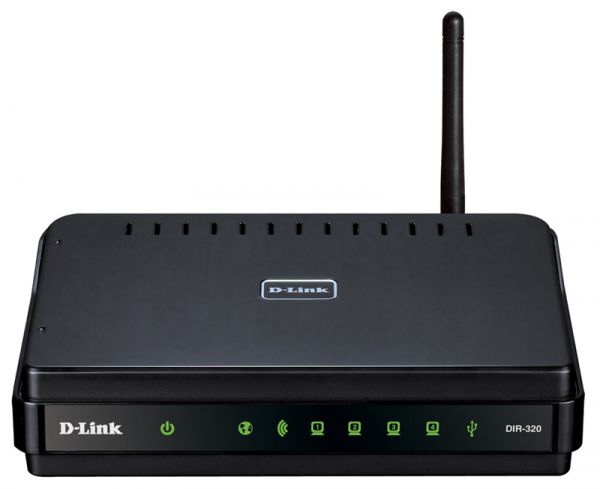 USB-port and Internet-port router is equipped with USB-port for the USB-modem with which you can quickly connect to the Internet via WiMAX, 3G GSM or CDMA.  You can also connect a multifunction wireless router DIR-320NRU to a cable or DSL modem or to a Ethernet-line and use a high-speed connection to the Internet for a wide range of tasks.

4-Port Switch Built-in 4-port switch allows you to connect computers equipped with Ethernet-adapters, game consoles and other devices to your network.

Security Universal Wireless Router DIR-320NRU has a built-in firewall. Advanced security features minimize threats of hackers and prevent intrusions to your network and access to unwanted websites for users on your local network.

Wireless Interface Using the multifunction wireless router DIR-320NRU, you can quickly create a wireless network at home or in the office, which will allow your employees or members of your family to connect to a wireless network from virtually anywhere (within the wireless network.)The Router can serve as a base station for a wireless network device of the standards 802.11b, 802.11g and 802.11n (at speeds up to 150 Mbit / s). In the router supports multiple functions for the wireless interface. The device supports several security standards (WEP, WPA/WPA2, IEEE 802.1X), filtration devices to be connected by MAC-address, multiple operating modes (Access Point, Client, Bridge), and also allows you to use the WPS, WMM.

Configuration and Management for and administer universal wireless router DIR-320NRU use the user-friendly web-based interface (available in several languages).

The interface with the user: